Healthcare consumer (patients, carers, and the public) involvement in research is a growing movement across the world, including in evidence synthesis. Cochrane is the world’s largest producer of systematic reviews

Healthcare consumer (patients, carers, and the public) involvement in research is a growing movement across the world, including in evidence synthesis. Cochrane is the world’s largest producer of systematic reviews and has a long history of involvement, though not consistently or throughout the evidence production cycle.

(i) explain the rationale for consumer involvement in evidence synthesis

(iv) share a range of practical resources for consumers and researchers.

The webinar will be followed by a Twitter chat hosted by @Cochraneconsumr.

Richard is Cochrane’s Consumer Engagement Officer. He supports the engagement and involvement of healthcare consumers (patients, carers, and the public) in Cochrane’s research and governance, including working with a growing network of 1750 volunteers across the world. He works with Cochrane authors and Groups and a range of partnerships that support this engagement, including the new International Network for Patient and Public Involvement in Research, of which he was a founder member. Richard has extensive experience of public engagement and partnership working in the voluntary, public and higher education sectors. He has worked as an adviser for the James Lind Alliance, supporting research priority setting at the University of York’s Department of Health Science on patient involvement where he is a Visiting Fellow.

Maureen Smith has a long history of collaboration with the healthcare system subsequent to a rare disease diagnosis in childhood. She is the chair of Cochrane’s Consumer Executive and is involved in several Cochrane projects and advisory committees. Maureen is a member of the COMET Initiative’s People and Patient Participation, Involvement and Engagement (PoPPIE) Working Group. In Canada, she is an enthusiastic, committed patient partner on several patient-oriented research projects and is the co-vice-chair of Ontario’s SPOR Support Unit’s Patient Partner Working Group. For the past 12 years, Maureen has been a member of the Board of Directors of the Canadian Organization for Rare Disorders (CORD). She continues to serve as a patient member on the Ontario Committee to Evaluate Drugs since 2014 and the Ontario Health Technology Assessment Committee for the past four years.

Please click here to register for this webinar on Zoom. 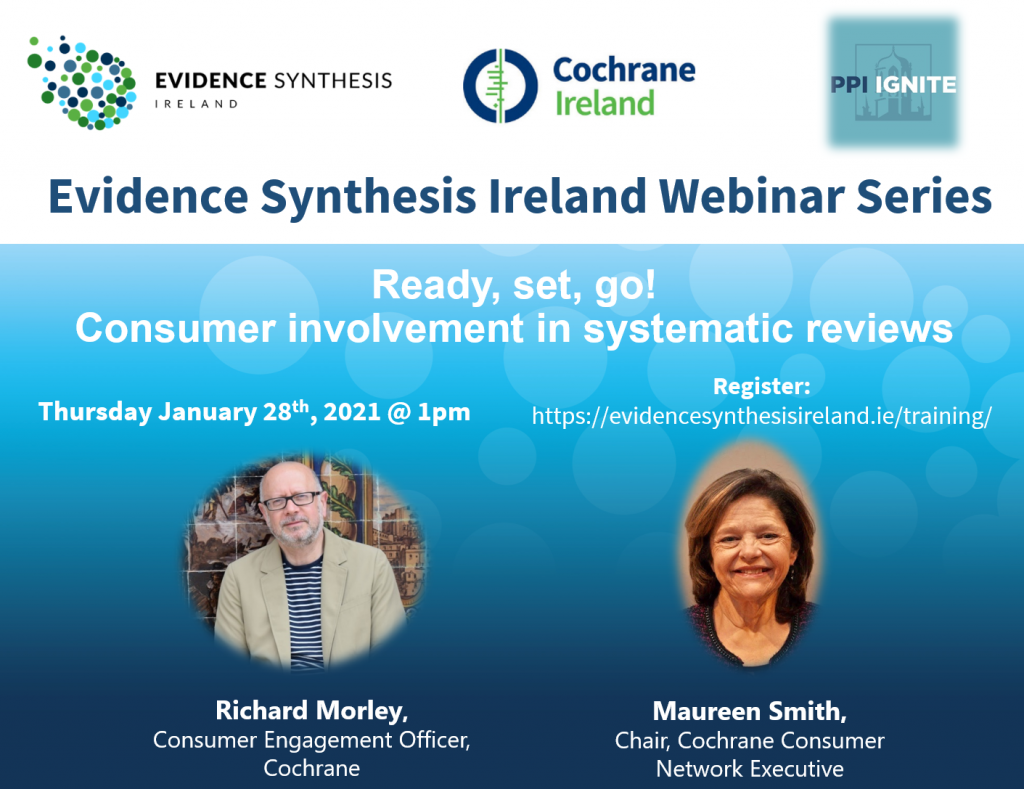 People often learn best by doing. In response to the frequently asked question, Can I use Cochrane Crowd for my students? we developed Cochrane Classmate. This tool enables people to

People often learn best by doing. In response to the frequently asked question, Can I use Cochrane Crowd for my students? we developed Cochrane Classmate. This tool enables people to use the Cochrane Crowd tasks for their groups of students. Cochrane Crowd is a platform that offers a range of small, discrete tasks aimed at identifying and describing health research. Many of the tasks are suitable for beginners, and a brief interactive training module accompanies every task.

This webinar will begin with a short presentation describing the aims and objectives of Classmate. It will cover the basics of how to use Classmate, as well as describe the major updates made to the platform in 2020. This includes the ability to invite groups to participate in the three main learning modules available on Crowd (Key Concepts, Understanding Study Designs, and Introduction to CONSORT), as well as the ability to set up ‘pathways’ (a set collection of tasks and activities) for students using Classmate. A live demo will then be done to demonstrate how to set up a Classmate activity for a group of people, and how to monitor progress. The final part of the webinar will be a question-and-answer session.

The presenter for this webinar is Ms. Anna Noel-Storr. Anna joined Cochrane in February 2008 as an Information Specialist for the Cochrane Dementia and Cognitive Improvement Group, Oxford University. She still holds this position, but since 2016 has led the Cochrane Crowd initiative, a crowdsourcing platform where contributors can dive into needed tasks aimed at helping to identify and describe health evidence. This work has had a major impact on Cochrane’s ability to keep up with the deluge of information. She is also the lead on Cochrane Classmate, a sister platform that enables people to use Cochrane Crowd tasks for engagement and learning activities with their groups.

Please click here to register for this webinar on Zoom. 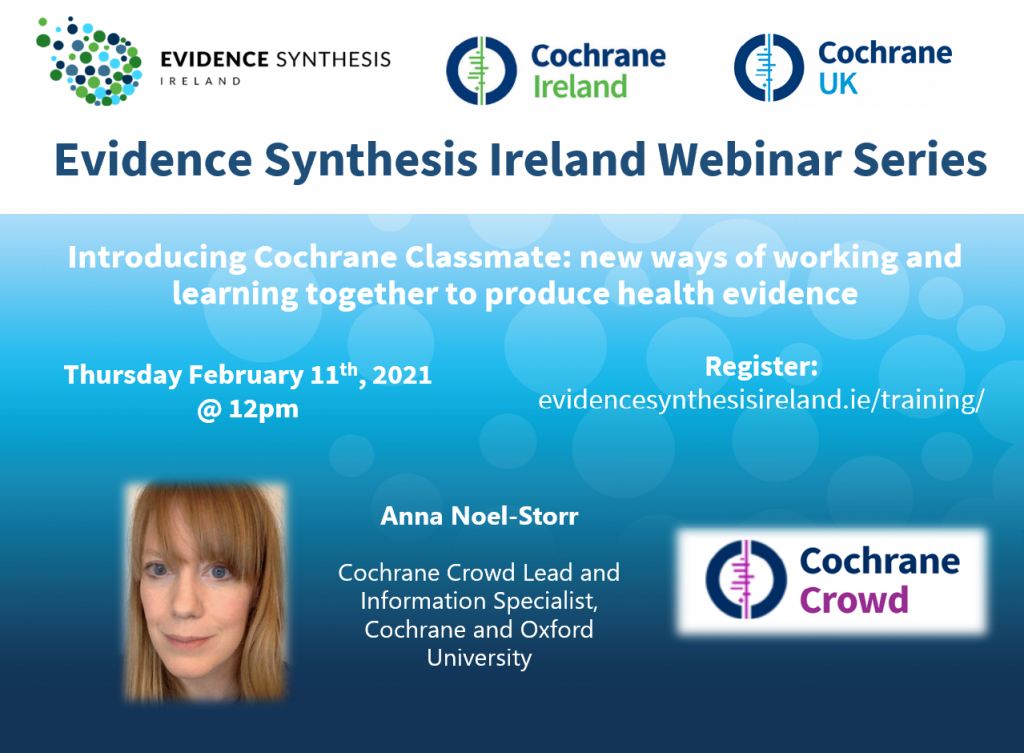 Please click here to register for this webinar on Zoom

Research trials in health and social care must be robust enough to be relevant and accessible by multiple stakeholders, including patients, practitioners, researchers, policy makers and funders. Core outcome sets

Research trials in health and social care must be robust enough to be relevant and accessible by multiple stakeholders, including patients, practitioners, researchers, policy makers and funders. Core outcome sets (COS) allow the development of stakeholder-agreed key outcomes to use in future trials and further build an evidence base through inclusion in future meta-analyses. COS development arises from consideration of a scoping review of trials and a primary qualitative study of stakeholder views by a transdisciplinary COS advisory group. However, the primary qualitative research can be time consuming with unclear impact. This presentation will outline a recent innovation in COS methods that explored the potential added value of a qualitative systematic review of stakeholder perspectives alongside a systematic review of trial outcomes to inform COS development in neonatal care using case analysis methods. Using these methods together identified more outcome domains for COS group consideration and greater depth of understanding.

The presenter for this webinar is Dr. Ginny Brunton. Dr. Brunton is an Associate Professor in Nursing at Ontario Tech University in Oshawa, Canada. She has twenty-five years experience as a Research Methodologist, focused on evidence synthesis with colleagues at the EPPI-Centre, London and McMaster University in Hamilton, Canada. These methods have focused on quantitative and qualitative research, particularly research on the public’s views of their health and care, funded by the Department of Health and Social Care, ESRC, NIHR and CIHR. These research synthesis methods include the use of framework synthesis and qualitative comparative analysis (QCA).

Dr. Brunton’s work arises from an interest in communities and their involvement in health intervention development, implementation and evaluation. She has conducted systematic reviews of community engagement in health promotion, most currently to inform NICE guidance updating. She has also studied issues in maternal-infant health, including core outcome set development for neonatal ICU care that used an innovative mixed methods approach. 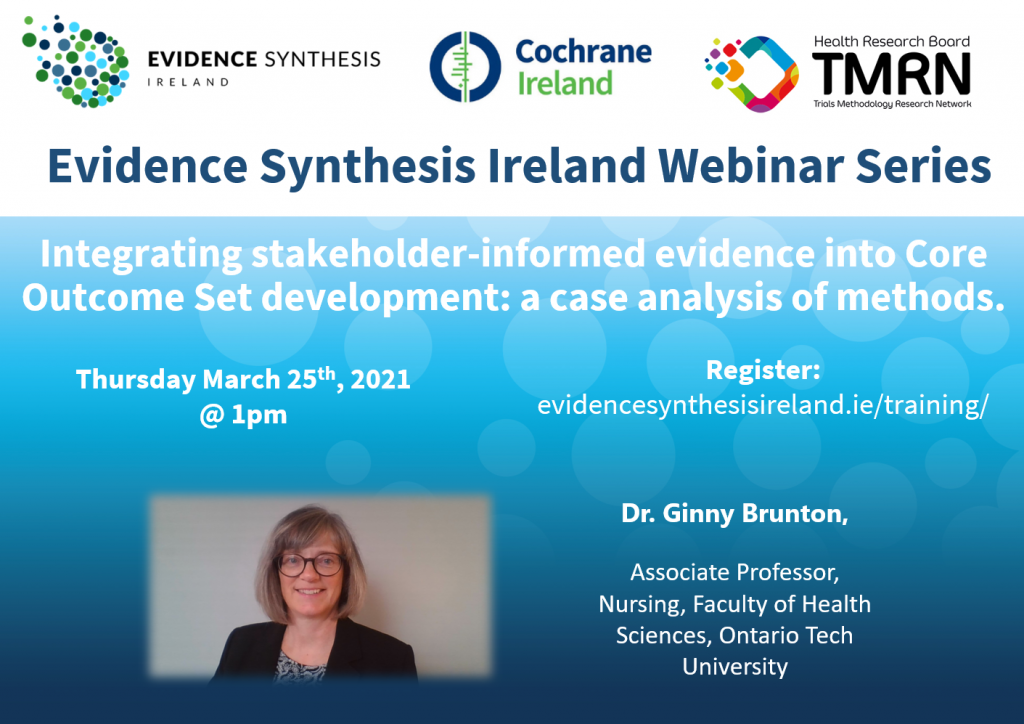 Please click here to register for this webinar on Zoom 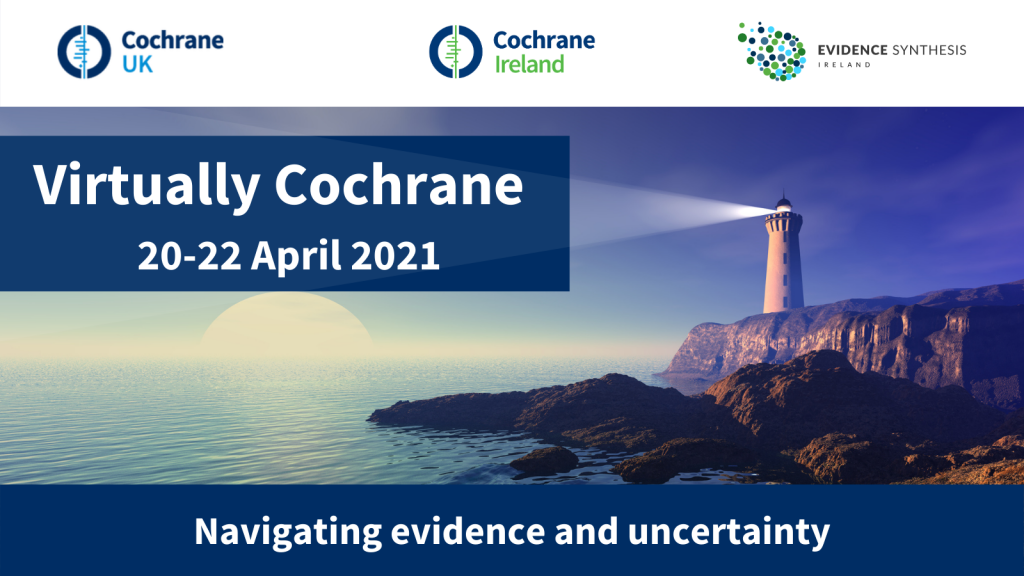 Save the date for ‘Virtually Cochrane’, an online event hosted by Cochrane UK and Cochrane Ireland: 20-22 April 2021.

In 2021, we are holding an online event ‘Virtually Cochrane’ for all those involved with, or interested in, planning, doing, sharing and using research evidence. We welcome you to join us for a series of sessions on the theme of ‘navigating evidence and uncertainty’. There will also be opportunities for networking. We were sorry to have to cancel the 2020 Cochrane Ireland and Cochrane UK symposium because of the COVID-19 pandemic but we look forward to making up for lost time in April 2021.­­

More information will be available soon on our website and social media, including information about how to register. For now, please save the date.

In this global pandemic rapid reviews are crucial to help make decisions. More info on our website: https://buff.ly/3iP3oKS