By Nikita Burke
Posted May 27, 2021
In Webinar
Webinar: Who Framed Qualitative Synthesis?: Thematic versus Framework approaches and how to choose.2021-05-272021-05-27https://evidencesynthesisireland.ie/wp-content/logo/esi-logo.svgEvidence Synthesis Irelandhttps://evidencesynthesisireland.ie/wp-content/logo/esi-logo.svg200px200px

Dr Andrew Booth, Reader at the School of Health and Related Research (ScHARR), University of Sheffield, has been a systematic review methodologist for over 25 years. He specializes in qualitative, mixed methods, realist and rapid reviews. Andrew has conducted published international QES in maternal care topics such as postnatal depression and attitudes to facility-based delivery. Andrew is a co-developer of Best Fit Framework Synthesis, one of the widely used methods of qualitative evidence synthesis. He is a technical consultant to the WHO Health Evidence Network evidence reviews. Andrew has been a co-convenor of the Cochrane Qualitative and Implementation Methods Group (CQIMG) for over fifteen years and is a member of the GRADE-CERQual core development team. He has co-authored the Cochrane Handbook chapter on Qualitative Evidence. Together with colleagues in ScHARR he has been running an annual course on qualitative synthesis for over a decade.

Thematic synthesis and Framework synthesis are the two most common and recommended methods of synthesis, featuring in guidance from both Campbell and Cochrane collaborations. Both derive familiarity from their origins as methods of analysis for primary research studies. Use of the two methods in synthesis extends for over a decade during which time the evidence synthesis community has built up a significant body of knowhow on when these methods work and when they don’t work so well. Nevertheless, even experienced proponents of QES are known to confess to falling at the first hurdle in terms of deciding whether a field is well theorized or not. This session offered practical advice illustrated with plentiful examples. It included advice on moving on to consider meta-ethnography if the data allow. 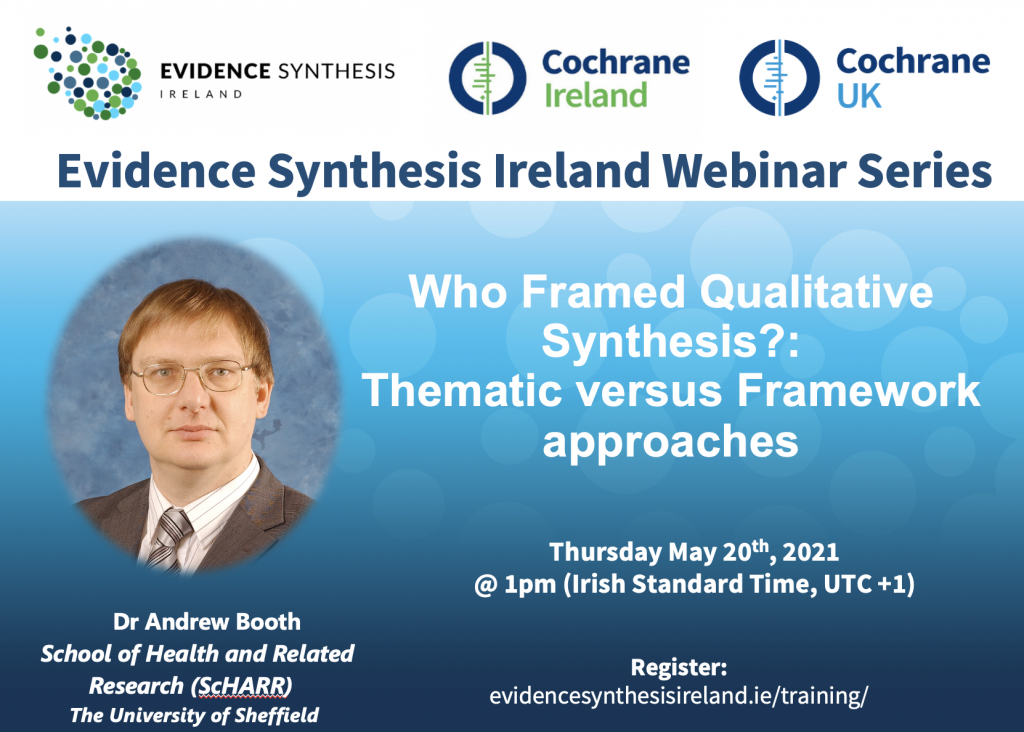 Be sure to tune in Friday where there is lots to be learned from our chair @houghtoncath on her experience of conducting a rapid qualitative evidence synthesis during the pandemic. #qualitative ... @n_gnursing @NUIGalwayMed @MRCNIHRTMRP https://twitter.com/evidsynirl/status/1407713483618148355

This website uses cookies to improve your experience while you navigate through the website. Out of these, the cookies that are categorized as necessary are stored on your browser as they are essential for the working of basic functionalities of the website. We also use third-party cookies that help us analyze and understand how you use this website. These cookies will be stored in your browser only with your consent. You also have the option to opt-out of these cookies. But opting out of some of these cookies may affect your browsing experience.
Necessary Always Enabled

Any cookies that may not be particularly necessary for the website to function and is used specifically to collect user personal data via analytics, ads, other embedded contents are termed as non-necessary cookies. It is mandatory to procure user consent prior to running these cookies on your website.